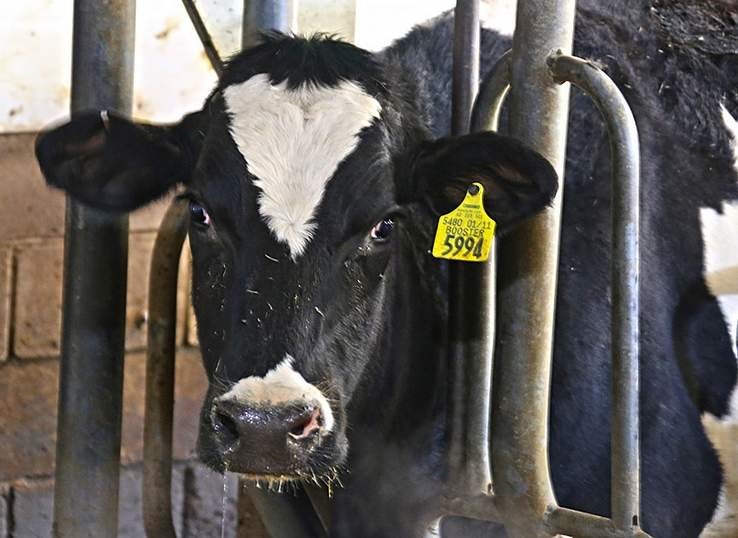 The Lewis Family Conservation Foundation donated $150k in November of 2015 to support the preservation of Bodwell Farm in Kensington, NH

The following article is courtesy of the Southeast Land Trust.

In the summer of 1928, Harold Willard Bodwell and his wife Dorothy drove their cattle up by work horse from Methuen, Massachusetts to their new 180-acre farm in Kensington, New Hampshire.  They bought the land for $8,000.  Within a year, the stock market crashed and their house wasn’t worth what they paid for it for another 35 years.

Their grandson, Harold Willard Bodwell III (aka Hal), is amazed at how they managed to stay afloat.  “In the old days you had to be diversified.  They had chickens, milking cows, beef cows, sheep and they also grew rasberries and blueberries to pay the taxes with,” he said.

Since then, six generations of the Bodwells, including Hal’s nine-year-old grandson, have lived on the farm.  To preserve the family land, the Bodwell family has agreed to permanetly conserve 105 acres of their farm located just behind the original farmstead, barns, and milking parlor.  Several family members also own 200 acres on the north side of Stumpfield Road, and SELT hopes to one day protect that land as well.

Bodwell Farm is the largest working farm in Kensington, but beyond the boundaries of the farm, the Bodwells lease and manage over 600 acres of open fields in the area for haying and grazing.  Loss of the land to development would cause a ripple effect throughout the surrounding communities and threaten the open space, field habitats and rural countryside for miles outside their property.

Their property is surrounded by 2,000 acres of unfragmented landscape, with two conservation focus areas on either side of the farm, making it a critical wildlife corridor that would be lost forever if developed.  The pastures and woodlands provide significant habitat opportunities for wildlife, including a variety of bird species such as bluebirds, meadowlarks, and American goldfinches as well as wild turkeys and foxes.  NH Fish &Game ranks the farm among the top three tiers of wildlife habitat in the state.

The Bodwells are committed to protecting the local wild life.  Each year they leave at least seven acres of pasture on their farm untouched by mower so that bobolinks and other ground-nesting bird species might have the space to escape predators and successfully rear their young during nesting season.

Jeremy Loungee, SELT’s Conservation Project Manager who is overseeing the Bodwell project, sees the bigger implications of the loss of these century-old farms.  “The loss of the farmland to development can be a slow but insidious process, changing the look and feel of our landscape forever.  These farms give the Seacoast its rural character and help to anchor our region to its agrarian roots.”

Provided folks don’t disturb the cows, the property is open for the neighbors to enjoy.  “we want the land to always be open to the community and we encourage people to use it,” said Hal.  “I enjoy when the neighbors are out cross country skiing, horseback riding or walking.  My father and I have always felt a responsibility to allow people to enjoy it.”

Hal loves being a dairy farmer, but at age 66, the 70-80 hour work weeks have caught up with him and he’s ready to spend more time with his wife and family.

He has succeeded on maintaining his dairy operations for many years even through tough economic times.  But, due to a low feed supply from the recent drought, and the economic forecast, he has decided to downsize his herd to 50 milkers.  Hal will continue the farm’s haying operation both at home and beyond.

“In 50 years it could be open land with people doing vegetable farming, horse farming, or just haying the land.  Who knows,” he said.  “With the easement protecting it, it will give somebody the opportunity to do something other than grow houses.”

He’s not sure what the land has in store for it, but he’ll take comfort in knowing the fertile soils that he, his father, and his grandfather have cared for will remain productive and protected forever.

Kensington Elementary Fourth Grader’s Special Project
June 23, 2015
Get Our E-News
Read about our specials, harvest and events. Sign Me Up
Recipes
Go to Top