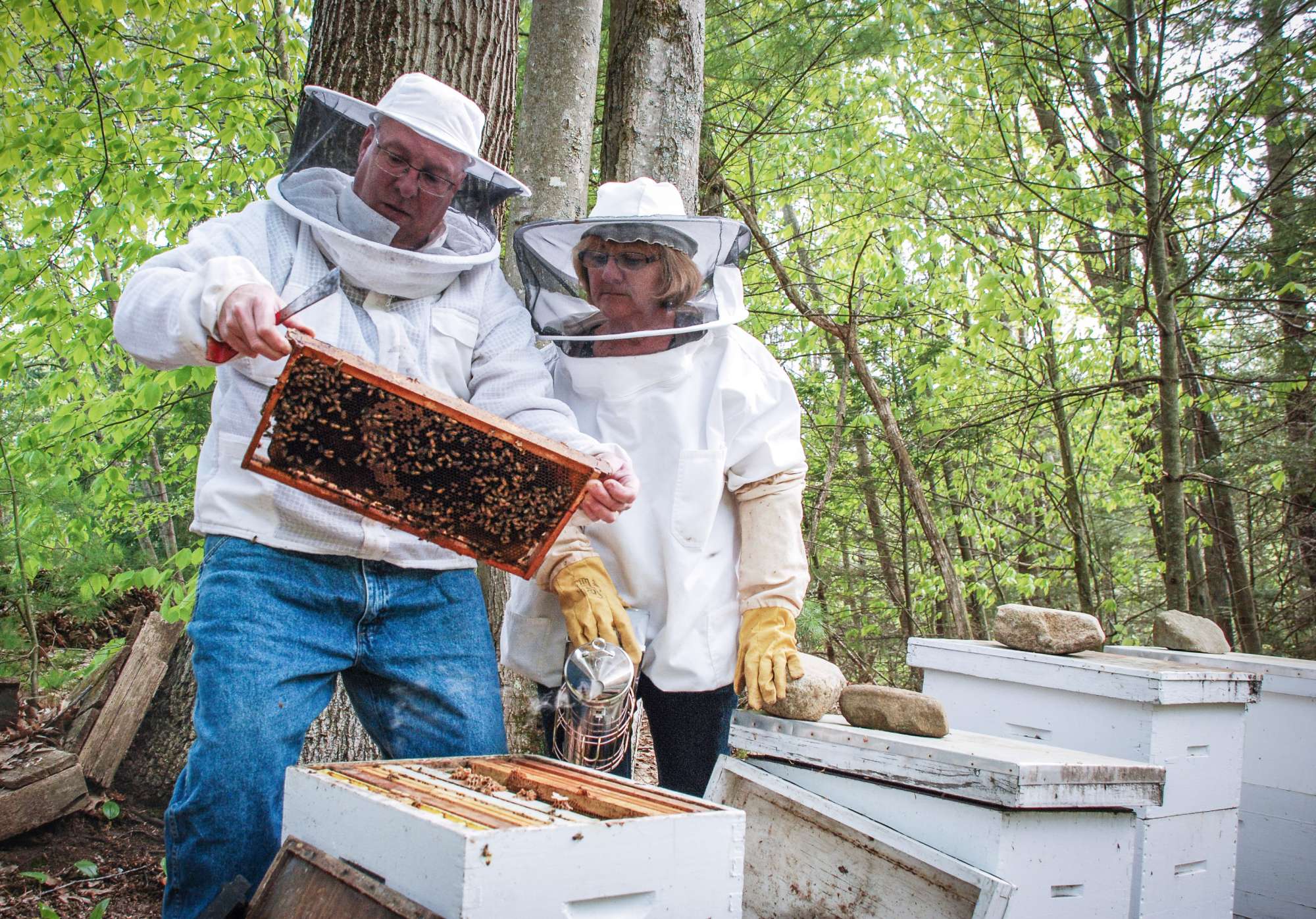 andBeautifully golden, naturally sweet and with antibacterial properties, honey is one of those power foods you find in most kitchen cupboards. Its story is just as fascinating as the product itself. And if you want to know how honey is made, you can do no better than to talk with Dan and JoAnne Phillips of Rocky Hollow Honey in Kensington, NH. The couple has been raising bees for over 20 years; their honey has won dozens of awards and has hundreds of loyal customers. The quality of their honey is a direct result of their passion, dedication and expertise.

Soon after they were married, Dan and JoAnne looked around for a hobby that would keep them outside and connected to nature. They decided to try their hand at beekeeping and the rest is history. The couple now has over 100 bee colonies and produces some of the best raw honey in New England.

Dan was no stranger to bees. He grew up in Amesbury, MA and as a kid he spent hours at the Topsfield Fair exploring the Beekeeping house. “I thought it was just amazing what those small insects were capable of doing,” he tells us. “I loved learning about how the bees built honeycomb, collected the pollen, stored the honey and then how it was harvested.”

It is amazing. Honeybees make honey by collecting pollen and nectar from flowers and plants during the spring and summer months. They use their long, tubelike tongues like straws to suck the nectar out of the flowers and store it in their stomachs. While inside the bee’s stomach, the nectar mixes with proteins and enzymes produced by the bees, converting the nectar into honey.

Back at the hive, the bees then drop the honey into the beeswax comb, which are hexagonal cells made of wax produced by the bees. They continue this process until the combs are full. The bees then cap the honeycomb with wax and move on to the next empty comb, starting all over again.

To harvest the honey, Dan removes the honey-filled combs from the beehives. He removes the wax cap with an uncapping knife and then places the honeycomb frames in a centrifuge to extract the honey. The centrifuge is a large circular container with racks for the frames. It quickly spins the frames and the honey flies out and is collected in the bottom of the container. The excess capping wax and the comb can later be melted down to make candles.

As the bees buzzed around us I asked Dan if he had ever been stung. “Oh millions of times,” he laughs, “it comes with the territory.” Some hives will be more aggressive than others. However, they are simply protecting their hive so you can’t blame them.” No you can’t, considering it takes about two million flowers and more than 55,000 miles in flight to make a single pound of honey.

Rocky Hollow Honey can be found at local farmer’s markets and the Farm at Eastman’s Corner.

Chris and Holly Batchelder of Hidden Brook Farm
April 7, 2015
Get Our E-News
Read about our specials, harvest and events. Sign Me Up
Recipes
Go to Top