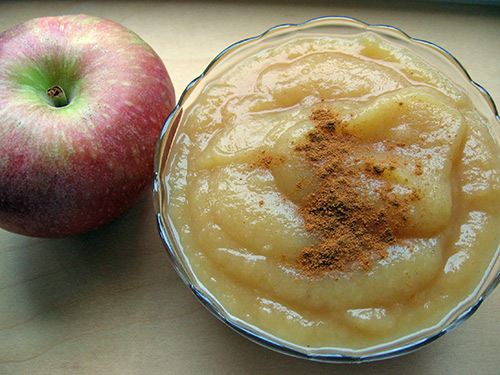 There is something magical about the smell of apples simmering on the stove. It’s a tradition in our house that once the apples are ripe in the orchards, we buy a big bag of local apples, core them, chop them up and turn them into the best tasting applesauce in the world. Well, that may be an exaggeration, but it is pretty darn good. There are many recipes for making applesauce, but here is a basic one to try and I definitely encourage you to experiment. Throw in some cranberries or pears. I had a friend who mixed in winter squash. Be creative and have fun! Take 8 large apples and peeled, cored and cut them into small pieces (sometimes I only half peel them, I like the skins). Put the chopped up apples in a large pot with enough water to cover them half way, about 2 cups. You can put in a cinnamon stick as well. Bring to a boil and then reduce the heat and let them simmer, stirring occasionally until the water has boiled off and the apples are soft and mushy, about 20-25 minutes. Mash the apples with a potato masher or a fork. Add cinnamon. You can add in a little sugar, although taste it first because usually local apples are so good you don’t need it. Serve it warm for a real treat! – Jenne Young

Kath Gallant’s Simple & Delicious Father’s Day Meal
June 16, 2015
Get Our E-News
Read about our specials, harvest and events. Sign Me Up
Recipes
Go to Top